The building, which took three years to complete, is carved into a dune on a beach in the coastal city in northeast China. 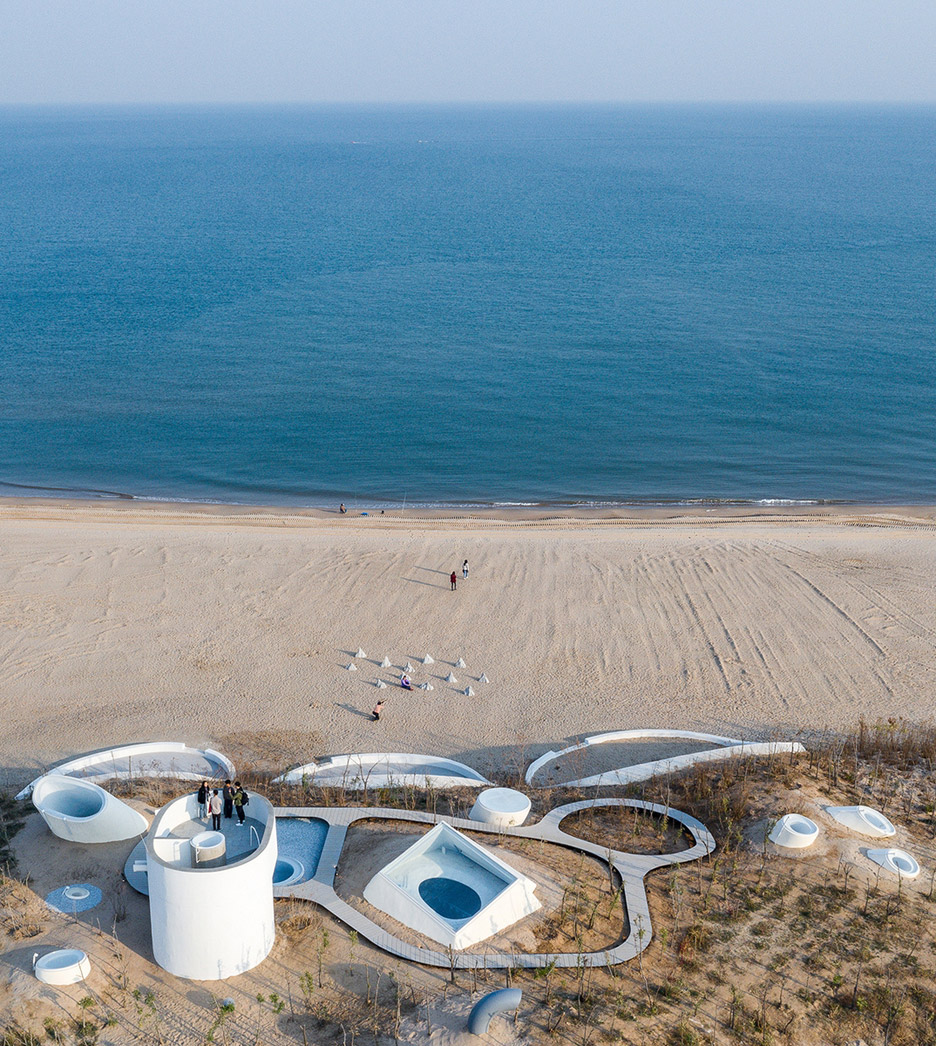 Its experimental design is emblematic of the current mood in the country, according to OPEN Architecture co-founder Li Hu.

“I feel like this whole country is the experiment,” he told Dezeen. “Many things are changing and life has changed super fast and yet we still live in the cities that we inherited.”

“Now, one of the advantages we have in China is that we have the chance to build a new architecture – to start from scratch.” 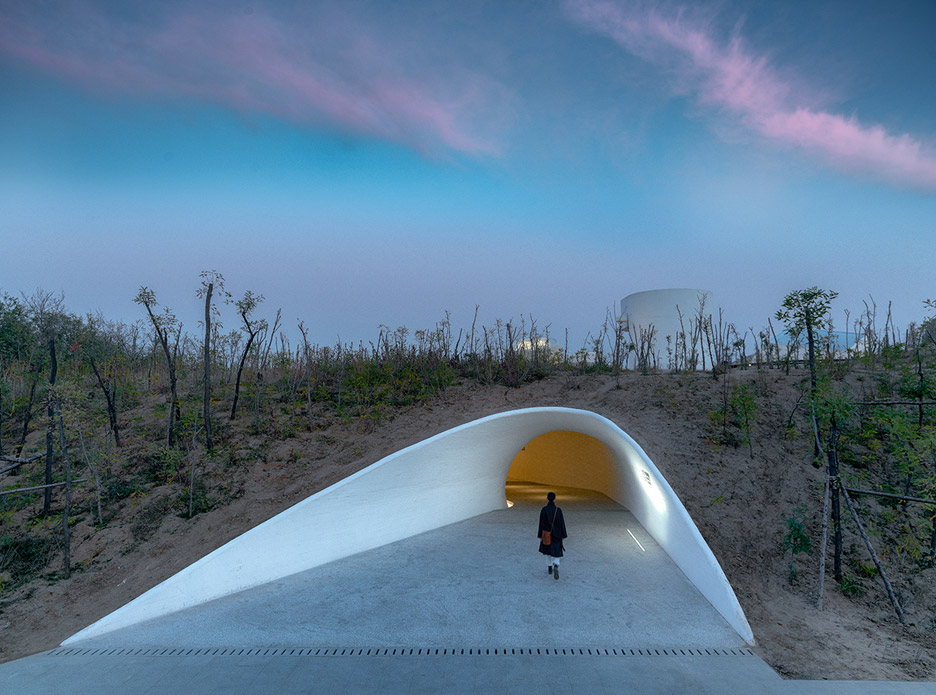 Ten galleries and a cafe are interlinked beneath the sand. The interconnected, organically-shaped spaces echo those of caves, the earliest form of human refuge and a form that inspired the narrative behind the museum.

“The walls of ancient caves were where art was first practiced,” Li Hu explained. 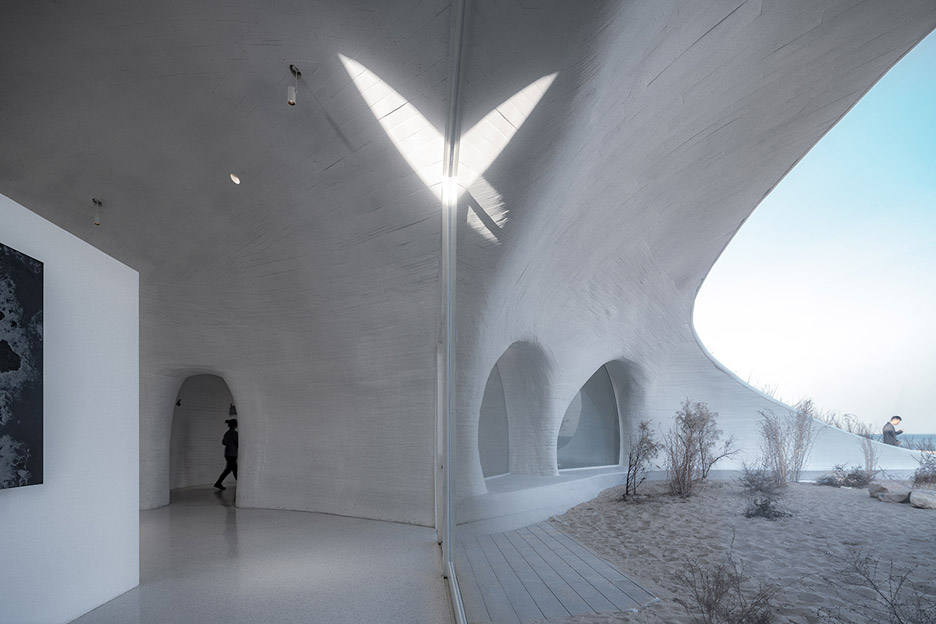 Local workers from Qinhangdao used strips of wood to hand shape the concrete shell. The architects chose to leave the irregular texture of the formwork, so these traces of the manual construction can be read across the walls.

Openings throughout the building frame different views of the sea and the sky, which can be seen changing throughout the day and allow natural light into the museum’s spaces. 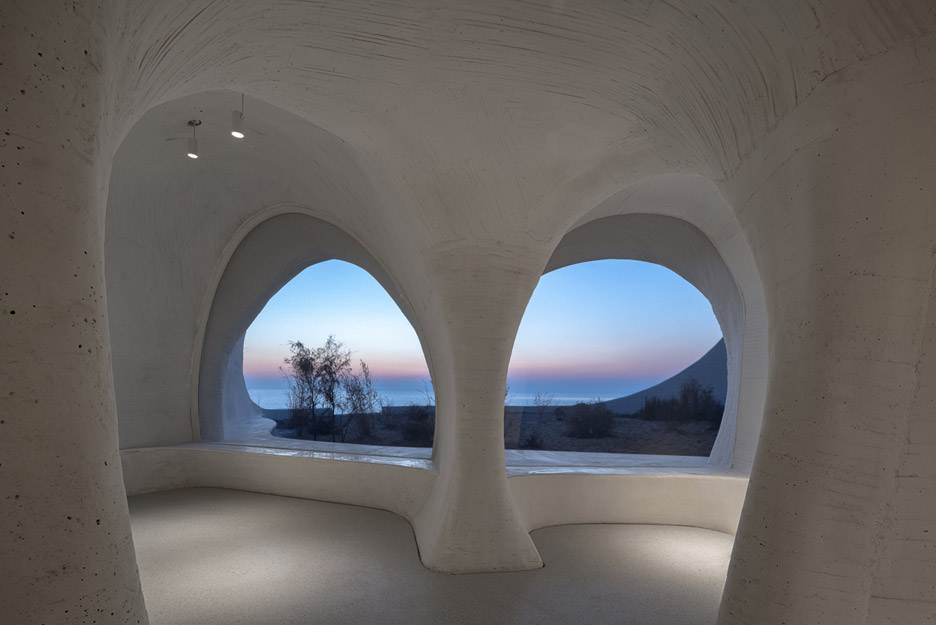 The delicate ecosystem of the dune took thousands of years to form, yet the client had planned to destroy it to clear space for the museum. Thanks to the museum’s presence, the landscape will be preserved.

“If we didn’t build a museum inside the dune, the dune would be gone today. Wiped out like everywhere else, because why have a dune if it’s blocking the view?” said Li Hu.

“If there is an integrated museum, then the dune is saved.” 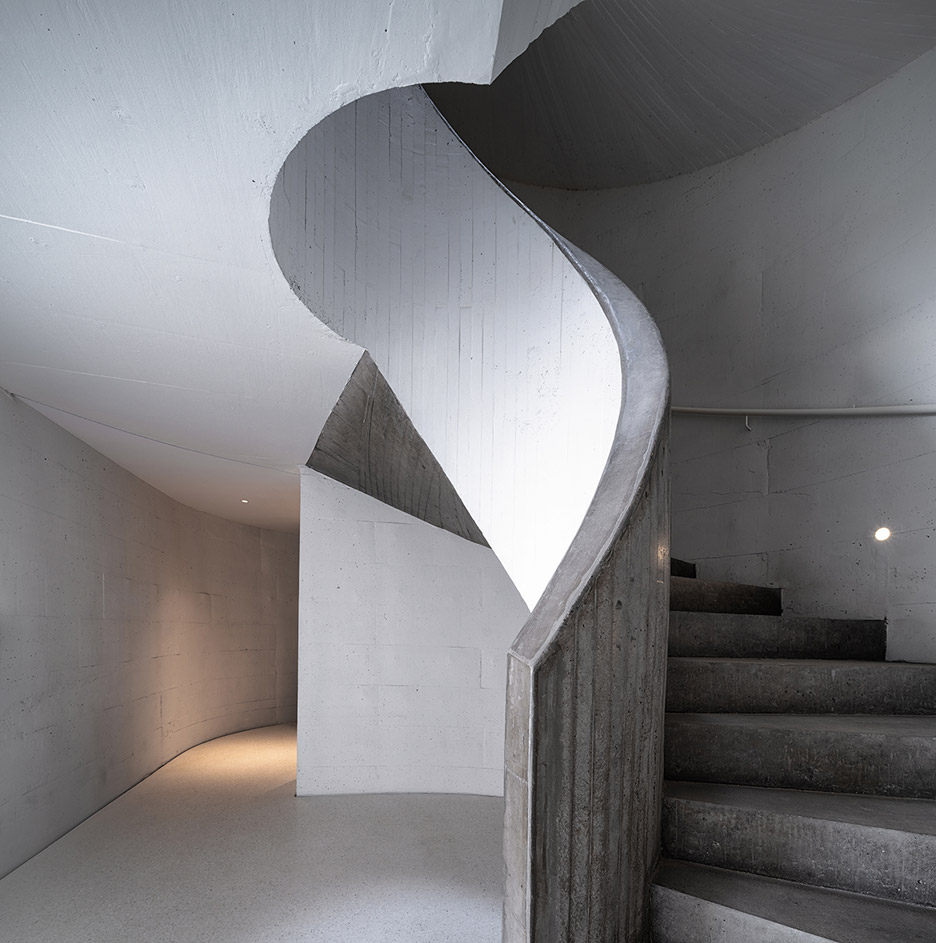 Sustainability was also key to the museum project.

The building boasts a sand-covered roof that helps to keep the interior cool in the summer. There is also a low-energy, zero-emissions ground-source heat pump system, instead of air conditioning. 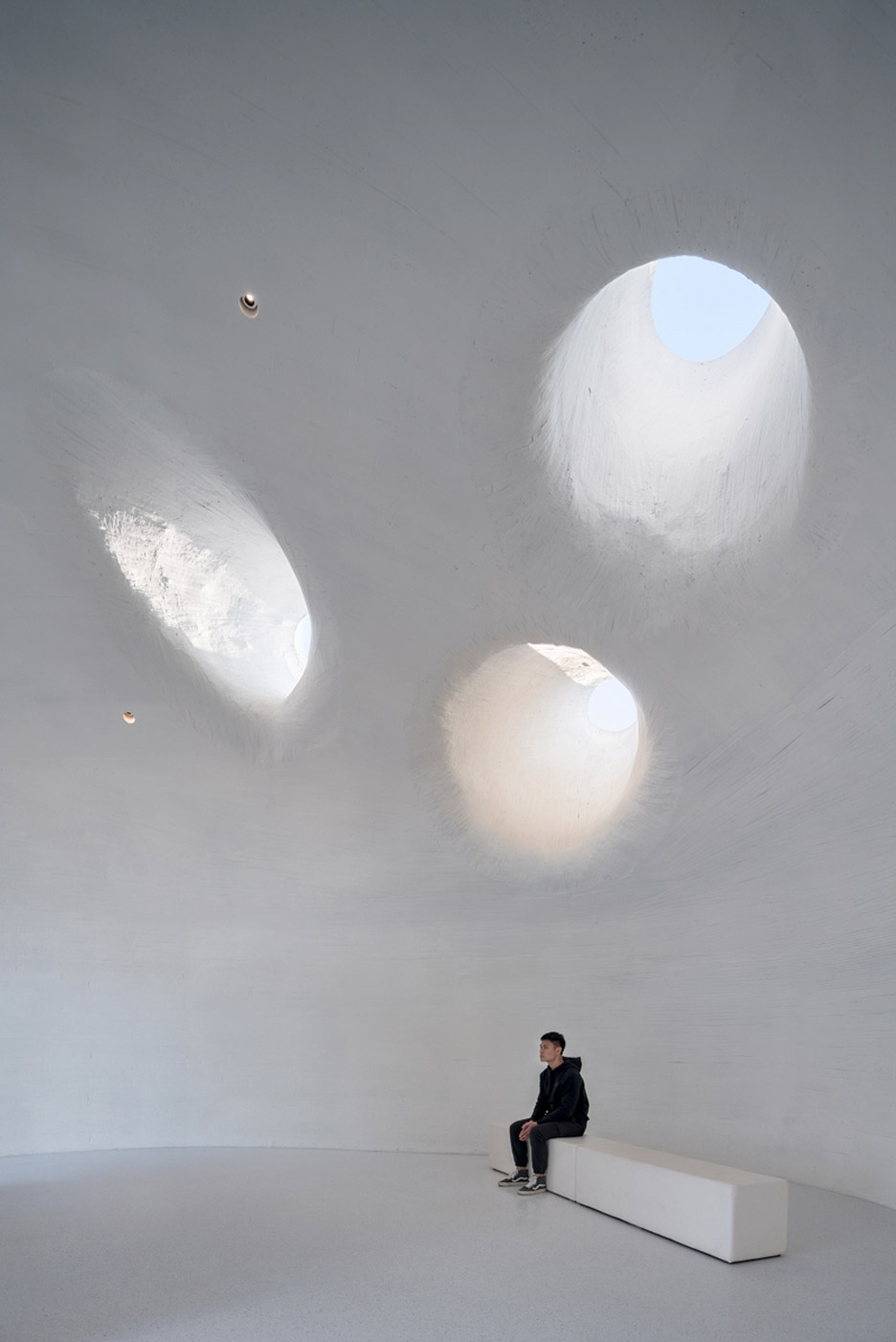 On the same site as the UCCA Dune Art Museum, OPEN Architecture plans to construct an artist’s studio a short distance out to sea. This studio will serve as a space for residencies and provide the visiting artist with a home-cum-studio that is only accessible by boat or at low tide.

The museum is operated by the Ullens Center for Contemporary Art (UCCA), one of China’s leading independent art institutions. The inaugural exhibition, After Nature, opened to the public in October 2018. 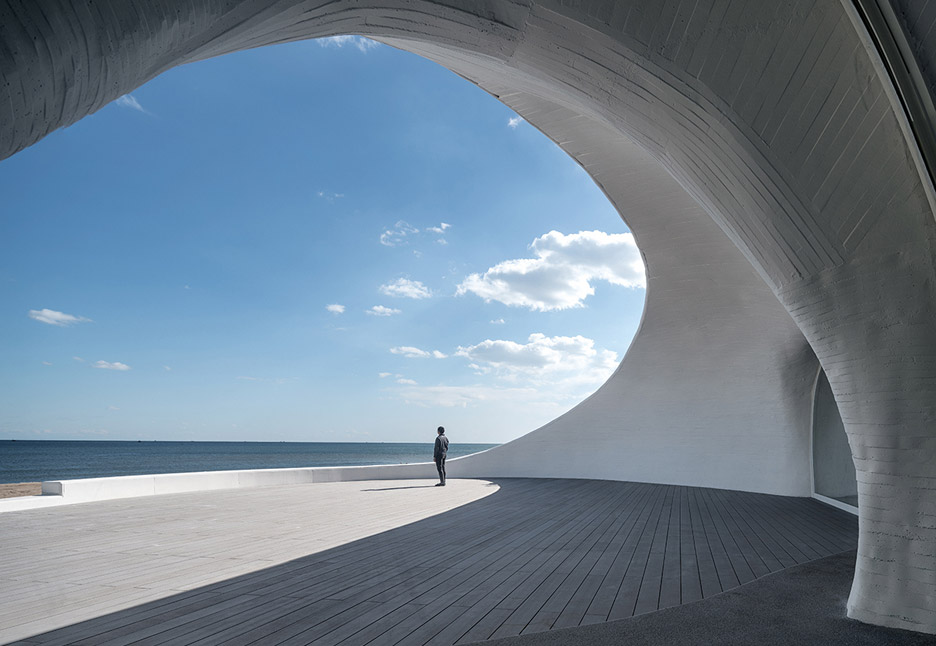 OPEN Architecture was founded by Li Hu and Wenjing Huang in New York. The Beijing office was established in 2008.

The studio focuses on the power of architecture to transform the way people live, and aims to strike a new balance between man and nature.

The practice recently launched its Mars Case as part of the China House Vision exhibition in at the Bird’s Nest Stadium in Beijing. The prototype imagines that humans might be forced to settle on Mars, where they cannot rely on natural resources and must live in a self-contained pod that can constantly recycle air, water and energy.

Photography is by Wu Qingshan.