This project is a residential renovation project located in Tangerang Indonesia which has a tropical climate and is quite hot and humid. The existing building cannot meet the client’s needs both in terms of space programs and in terms of design desires. Seeing this, we created a design by combining the needs of the occupants and the building itself, where the front of the building directly faces west so that the rooms in the front area have a hot air temperature until the evening. Therefore we added a layer on the facade of the building which aims to filter the light that enters the house. Because the name of the occupant is DJ, we also make the analogy of making the shape of the building as if it were two separate parts between the right and left sides like a turntable.

Background and original appearance: rural revitalization led by aesthetics and a three-no ordinary village. Xiuwu County is located in Jiaozuo City, Henan Province, and belongs to the north of Henan. In recent years, Xiuwu County has vigorously advocated the path of rural revitalization led by aesthetics and has achieved remarkable results. Zaiwan Village is a typical plain village, which belongs to Qixian Town. The whole village was relocated in the 1960s, and the spatial structure was in the shape of fish bone, without historical buildings. In lack of landscape, the village’s west side is close to the national highway, and the hills on the East belong to military zone forbidden from entering. The village has no cultivated land or collective economy. Villagers are not poor who work either in the service industry at the Yuntai Mountain scenic spot or in nearby mines, but they lack endogenous power in the long run. Facing such a “three-no” village (no scenery, no style, and features, no industry), how to improve it is a difficult problem: not only not to conform to conventional pattern of simple painting and plastering, but also to give the village new personality within the limited cost.

atelier barda sought to respect the building’s history, proceeding only to subtle changes on the original elements, and reinforcing the transition between old and new.
The post open-air courtyard adds a pop of green to the humble interior renovation in…

The 15 cent site had an existing house, a warehouse and numerous trees and was located within a kilometer radius from the Kollam beach in Kerala. The adjacency to the sea coupled with the humid climatic conditions of the region encouraged us to adhere to an open plan. The vision was to design an energy-efficient house that would benefit from natural phenomena like cross ventilation, passive cooling and natural lighting. The plan and the volume of the spaces were hence worked on carefully to improve the efficiency of the built spaces that blends seamlessly with the exterior. A conscious study was rendered to retain all the existing vegetation within the site and to insert the built space appropriately. 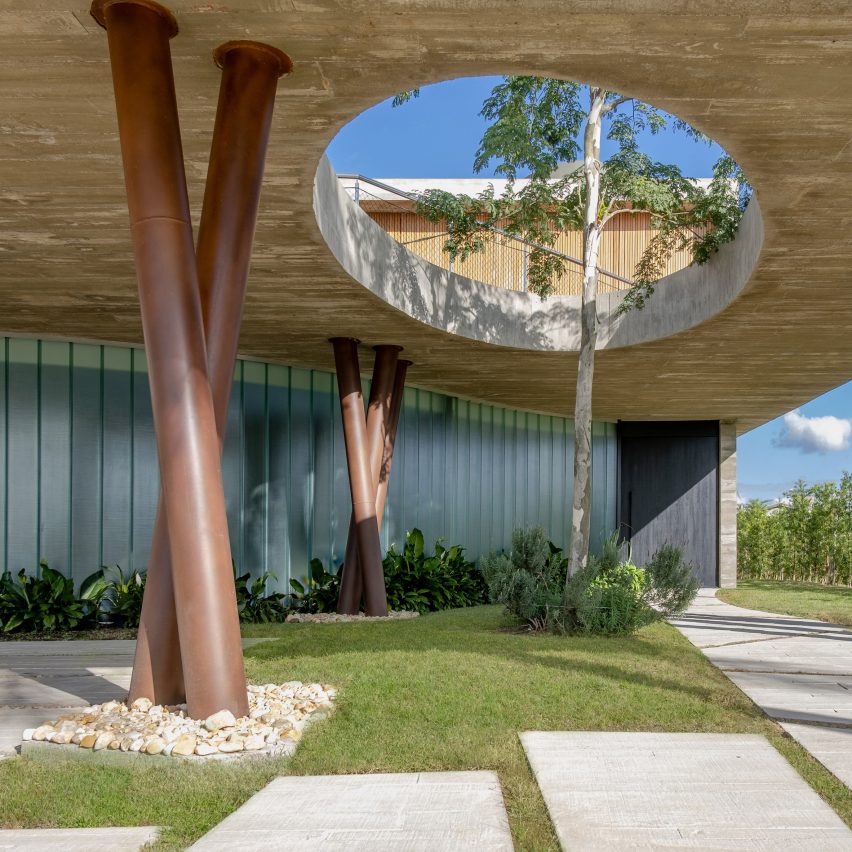 A leafy tree rises up through a circular opening in this Brazilian residence and yoga studio, which was designed by the architectural office of Stemmer Rodrigues. The 350-square-metre home is located near Guaíba Lake in Eldorado do Sul, a town in the southern state of Rio Grande do Sul. The project’s name, Anada House, stems

MuDD architects designed a writer’s cabin that offered the client a space for inspiration and meditation in the heart of a green garden.
The post complex curvy bookshelves decorate this writer’s cabin immersed in the nature of madrid appeared first on …

Countertops play a major role in the overall look of a kitchen and are a key feature to get right for a successful remodel. We asked established kitchen designers and remodelers to share which countertop materials, thicknesses and finishes they’re lov…

Sensitive preservation of a heritage architectural masterwork, the SFU Plaza Renewal fulfills the University’s vision for dynamic integration of innovative education, cutting-edge research, and far-reaching community engagement. The upgrades to the outdoor central spine, a processional route of great significance to the campus, have greatly improved user experience by aesthetic renewal and improvement of the campus outdoor public space.

This welcoming side yard in Seattle came from the homeowners’ desire to have a space where they could gather with friends and family while also having their own private natural retreat. With its shade-loving plants, artistic accents and lounge-worthy …

The new Riverstone Transit Center brings the administrative staff and bus services for City Link and Paratransit to a central hub location to provide riders with a safe, clean, and convenient experience. The project includes an Administrative Building, outdoor public restrooms, and a covered waiting shelter for riders. The site includes landscaped pathways to each of the eight bus loading areas, as well as 80 parking stalls and additional space for future growth.